Hailstones the size of olives stung our skin and we were cold and getting colder and one tree was no shelter for a group of cyclists. Half an hour before at the foot of La Creueta, we’d all put on more sunscreen and packed away our rain jackets as the hot August sun beat down. Things change quickly in the Pyrenees and the storm changed sunny blue skies to icy hail in the time it took to peel on a jacket.

Just across the road stood the van and some shelter, we had to move or freeze, so I ran over as fast as my cleats would allow, and Raul opened up for me to climb in with a mound of luggage shutting me in darkness to wait.A minute later four more appeared and into safety while the ice storm raged.

All this was a very long way from training in Almohalla 51, Archidona, in July in the searing heat, often leaving at daybreak for cooler training temperatures.

For the cyclists reading this, the followingis the count for www.pirenaica.com Mar al Mar 2021:

891km from Irun on the Atlantic coast of the Basque Country to L’Escala on the Mediterranean coast of Catalunya in seven stages from Sunday 31st August to Saturday 6th August 2022; Cols – 23;

Saturday 30 July I’d arrived in Zaragoza on the AVE from Antequera Santa Ana with my bike and enough kit for a week to meet up with Biktor and the Pirenaicos and onward to the start in Irun on the Basque Atlantic Coast. Irun appears as a functional place, semi-industrial and dinner was in a shopping Mall which felt a bit impersonal and far from my memories of the mythical Pyrenean climbs.

Stage 1 – 110km and 2,800m of climbing from the Atlantic Coast at Irun to Roncesvalles where the Basques destroyed Charlemagne’s rear-guard in 778: our large group of 50 cyclists from all over the world split into three groups and comically and frustratingly, the first puncture after 50m of riding had us waiting and discussing the weather. The first day highlight was the final climb of the Col de Lindux chosen by French General Reille to attack Anglo-Portugese forces in the battle of Rocesvalles in 1813 in the Peninsula war. It’s a tough approach to battle, climbing up almost 800m in 9km with stretches 19% gradient, crawling up through unforgiving wooded slopes.

Stage 2 – 140km and 3,020m of climbing to Candanchu: Roncesvalles is also one of the accredited starting points for the Camino de Santiago de Compostella and at 6am small groups of

doughty walkers were setting off from the refuge next to our hotel as we ate breakfast. Almost 30km downhill is always a good start to a day on the bike and wrapped up warm, dropping down from Roncesvalles was a beautiful sweeping descent. The climb of Ahuski is a little-known beast, climbing up a beautiful valley with consistent stretches of 11% and a final chunk of more than 13%. Such a peaceful place though, I stopped to watch raptors circling prey and hoping that I wasn’t on their list! Climbing up the Cold de Somport at the other end of the day was a delight and over to Candanchu in France.

Stage 3 120km and 2,363m of climbing to Lourdes: The steep side of col de Marie Blanc didn’t seem too much of a struggle after Lindux and Ahuski. Then onto one of the legendary climbs of col D’Aubisque where Stephen Roche won in a skin suit in 1985. The road from the Aubisque to Soulor clings to the side of the mountain and is one of the most spectacular stretches in cycling with stunning views over the valley. After the short climb up to Soulor we dropped down into Lourdes feeling like Thor Hushovd winning the stage in the Rainbow Jersey in the 2011 Tour although without quite the same whoosh.

Stage 4 – 132km with 3,938m of climbing from Luz to Viehla; La reina! One of my favourite training rides from Almohalla 51 two weeks before Mar al Mar was 133km and a loop twice up the Puerta de Sol which tops out at

1075m and with 2,513 metres of ascent. The local club of Alfarnate run a cyclo sportiv on the last Sunday in May which they call Pirineo de la Costa del Sol. The Pyrenean Queen stage over the mythical and legendary Col du Tourmalet, Col d’Aspin, Col du Peyresourdes and Col de Portillon to Viehla had almost 1500m more climbing on a four col day reaching Viehla at 7.30 at night. Long day: hard day. But a fabulous day and hot with it. The Tourmalet is legendary for so many reasons; included in the tour first in 1910 and since then more than any other mountain pass. It’s a beautiful climb up from Luz Saint Suaveur particularly now that cyclists can now take the car-free route de Laurent Fignon for a big chunk of the way.

At 19km it’s a long way but it’s not too tough other than the final km struggle to what must be the best cycling café in the world at the top. It’s a long day and we arrive exhausted and exhilarated at Viehla at 7.30 after 11 long hours out.

Stage 5 – 127km with 2,427m of climbing to Seu d’Urgell. Straight out of Viehla onto the Col de Bonaigua which was my first ever Pyrenean climb from Sort in 2006. It’s a slow 5% grind upto the ski station at 2,072m. The descent is fast though none of our group were anywhere near the 130kph recorded by Marcus Burghart in the 2016 Tour de France. Then as we approached Sort the best lunch stop at Panto de la Torrassa. Its hot hot hot today and the climb up to El Canto offers little shade. We’re definitely into Catalunya now as the character of the villages change. A real treat tonight though as were staying at the beautiful Parador at Seu d’Urgell. It’s a lovely place with top-notch design colour-coded floors and a massive atrium which reaches up to the roof.

Stage 6  – 101km and 2,547m of climbing to the Ski station at La Molina. I finally found my climbing legs on the Col de Trava another beautiful Cat 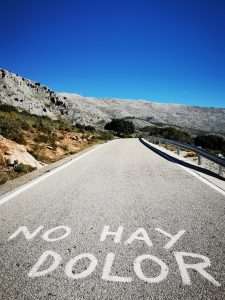 alunyan climb up through the wooded slopes to a little under 1500m. As I flew up to the heights I was thinking about Puerto del Sol and my many kilometres of training, and the road proclaiming “No Hay Dolor”. Not in the legs maybe, but the hailstones were a sudden reminder from above.

Stage 7  – 145km all downhill from the top of the mountains at La Molina to the sea at L’Escala. Oh yes apart from the 1,330m of climbing!!  I was finally able to dip a toe in the Mediterranean after all that way with fabulous cyclists from Brazil, Uruguay, Columbia, Dominican Republic, England, the Basque Country, Catalunya, Valencia, Tenerife, Gran Canaria, Navarra,

I couldn’t have done it without the many hours of training in the hills of Malaga, Cordoba and Granada provinces in the searing summer sun of Andalucia, from the starting point of our hotel Almohalla 51, perfectly located in the hill top town of Archidona.

For the Pirenaica Mar al Mar experience go to www.pire

Recently featured in The Times and in The Telegragh, The Guardian, The Independent, Coolstays